Who is Devil Dan? 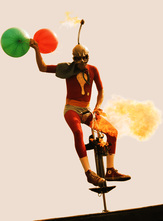 Daniel Huling was born and raised in Denver, Colorado.  In high school Dan went on a European vacation with his brother and was introduced to street theater for the first time - it was clear that this was the path for him.  Dan and his brother Mike spent the next few years perfecting their circus skills and The Handsome Little Devils were born.  Together they toured the world with stops in Japan, Italy, England, Australia, Canada and New Zealand. They even made an appearance on The Tonight Show with Jay Leno.

Dan and Mike used their degrees in Art to develop a unique look for the show. They added a couple more people to the crew and began performing as the Squirm Burpee Circus. Last year the show made its Off Broadway debut in New York City.  Currently Dan is touring solo as The Devil Dan Show. He is a paddle-ball master and he just might steal your heart.